The champions league is bringing so many surprises this year, so everything was expected from last night match. However, the greatest player in the world had different plans, and after his promise to Barcelona’s fans to bring the European cup to the city, he did not want to disappoint them. 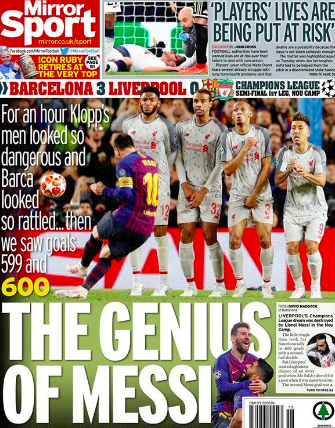 This champions league semi-final first branch, was expected to be a very competitive game. Some experts even call it an anticipated final. But Leo Messi, an expert in this kind of game was more than ready for the challenge.

During the first-half Luis Suarez anticipated the Liverpool’s defensive line to put Jordi Alba’s cross into the net. That was the only play of the half that surprised a very well organized and energetic Liverpool’ line up.

The second-half started wit a very dominant Liverpool, that attacked Barcelona’s goal time after time. Only a couple of great saves from Barcelona’s keeper Ter Stegen, and a little bit of luck, kept Liverpool from not scoring a goal in the first minutes.

When Liverpool was playing its best football, Messi received a ball in the las third of the pitch, made a great pass between lines that ended up with Suarez shot against the crossbar. Messi got the rebound from Suarez shot, and put the ball inside the goal with no opposition.

It was not until the 82th minute when Messi scored his goal 600 for Barcelona. The glorious 600th was a wonderful free-kick against Liverpool’s heart. As Messi said after the League title celebrations this past weekend, he made a promise to win this champions league. After Messi’s exhibition, this semi-final looks almost over.

After the game, the football world was praising Messi for his two goals, except Messi himself, who said that, Anfield is a very difficult stadium, and nothing is decided yet. On the other hand, Liverpool’s coach Klopp said “ Leo Messi is unstoppable at this moment”.