Both teams have made plenty of early breakthroughs in the Women’s World Cup so far and we’re expecting the goalmouth action to begin quickly in Lyon.

Having knocked out hosts France in the quarter finals, USA are 3/4 (1.75) favourites to win the Women’s World Cup.

England are seen as the biggest danger to the defending champions according to bet365 who make them 7/2 (4.50) to go all the way.

Phil Neville’s side have won all five of their World Cup matches in France so far, but the Lionesses are underdogs to continue that run in Lyon. 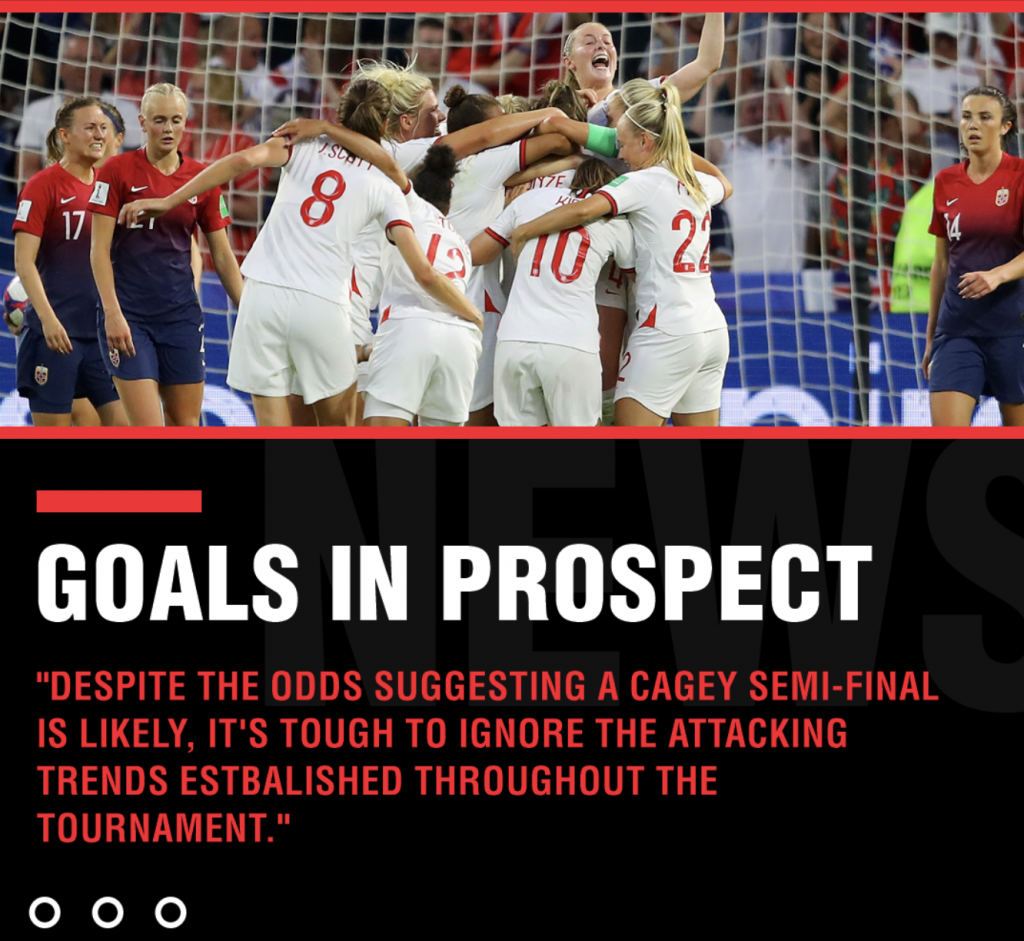 The last meeting between the pair ended 2-2 at the SheBelieves Cup in March.

In terms of qualification for the final, England can be backed at while the holders are just 2/5 (1.40) to progress.

England captain Steph Houghton shrugged off an ankle complaint to start against Norway. Neville has no new injury concerns, neither does USA boss Jill Ellis.

Rapinoe has struck twice in each of the previous two matches and the 33-year-old is 15/8 (2.88) to extend her scoring streak in this one.

Despite both teams racking up the goals throughout the tournament, the bookmakers believe this will be a low-scoring affair.

Scotland‘s consolation in a 2-1 defeat on matchday one was the last time England conceded a goal.

SA have been tough to breakdown too although both France and Spain did get on the scoresheet in the previous two rounds.

Fast starts have been a hallmark of both teams’ performances in France this summer. Despite the odds suggesting a cagey semi-final is likely, it’s tough to ignore the attacking trends established throughout the tournament.

In the 10 games these teams have played in France this summer, nine of them have seen at least one goal inside the opening 30 minutes. bet365 go 5/6 (1.83) about the deadlock being broken before 31:00 in Lyon and that makes plenty of appeal.

There’s a long shot worth chancing in Lyon too. Both teams to score in the first half is 9/2 (5.50) at the time of writing. Given how quickly both teams have started their respective matches, this selection looks overpriced. It also landed in the previous meeting between the pair and looks worth chancing once again.