The World Cup-winning midfielder will be sticking around at the Santiago Bernabeu, with another 12 months added to his terms in the Spanish capital

Toni Kroos has committed his future to Real Madrid by agreeing a contract extension through to 2023. Kroos, 29, joined Madrid for €25 million in July 2014 and won 12 trophies including three Champions Leagues and one La Liga title in his first four seasons in Spain.

The World Cup winning-midfielder had been tied to the Blancos until 2022, but another 12 months have now been added to his terms at the Santiago Bernabeu.

That means he will be going nowhere during a summer expected to deliver much change in the Spanish capital.

Real said in a statement on their official website: “Real Madrid CF and Toni Kroos have agreed to extend the player’s contract, which is now linked to the club until June 30, 2023.” 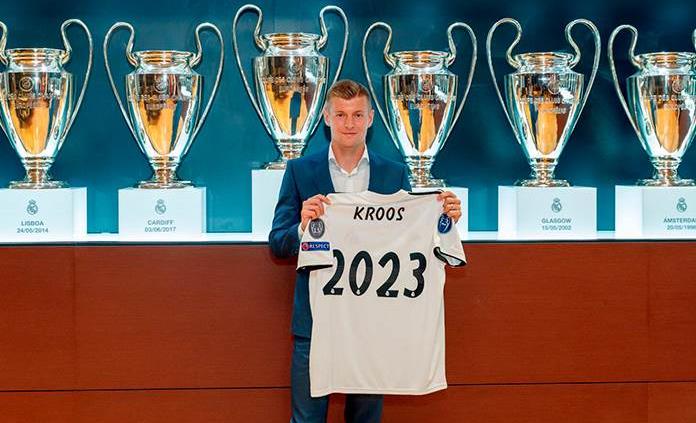 Zinedine Zidane was said to have cast doubt over Kroos’ future when discussing the Germany international back in April. But, Zidane clearly believes that Kroos still has an important part to play under him.

With Madrid preparing to overhaul their playing staff, it was suggested that the 29-year-old could be among those moved on.

Quizzed on Kroos, Zidane said: “Toni is a key player. He’s been in Madrid five years and has done great things. He’s a great player that brings calm. I’ve always liked him.

“Everyone talks about Toni, and other players, in terms of whether I want them or not. Every player is good and important. There will be changes but not right now, at the end of the season.”

Kroos will be among those disappointed to have not offered more to the collective cause.

He has, however, enjoyed a trophy-laden spell in Spain.

Having been snapped up from Bayern Munich in the summer of 2014, he has helped Real to three Champions League crowns and a Liga title.